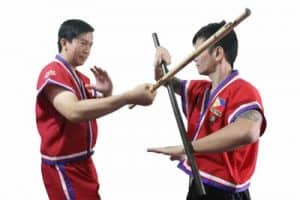 Even before Ferdinand Magellan made it to the Philippines in April 1521, martial arts and combat had already made it to the islands. In fact, Magellan was soon slain by a Filipino sword under chief Raja LapuLapu during battle. Martial arts in the Philippines has evolved from traditional indigenous fighters and other various fighting methods transplanted to the islands into a popular combat sport today. Known for their heavy use of weaponry, the Philippines formed their own fighting styles and techniques practiced throughout the world for various combat training. Fighting is such an essential part of the culture that in 2009, the Republican Act 9850 declared Arnis the national sport and martial art of the Philippines. On this page we will discuss the history and development of Filipino combat sports, how modern-day fighters have affected it and legal ways that you can bet on sports while visiting or residing in the Philippines.

Arnis is also known as Kali or Eskrima and is a martial art known for its use of weaponry, hand to hand combat and self-defense mechanisms. Believed to have been developed by indigenous people from various methods brought to the islands over time, this can be seen in the way the martial art name has developed. Arnis was known as Kali by the native people up until 1873 when it was renamed while under Spanish rule. Kali is the origin and can be translated to long knife or sword. Eskrima is derived from a Spanish word that means fencing and Arnis is also derived from a Spanish word that means armor. Even though the words mean different things it is all referring to the same martial art just different periods of time.

Is It Legal To Bet On Combat Sports In The Philippines?

Yes, it is legal to bet on Martial Arts or combat sports and in the Philippines and many people do so either at legally sanctioned offshore online sportsbooks, limited domestic online sportsbooks, or at brick-and-mortar sports betting shops spread throughout the islands. There are no Philippine gambling laws that make it illegal to bet online at offshore betting sites as long as they are licensed and regulated. Domestically, 21+ gamblers can place a bet on combat sports in person, online, or by phone at MegaSportsWorld (MSW) locations. MSW is regulated by PAGCOR, the Philippine Amusement and Gaming Corporation, which means they are operating legitimately within the industry.

Which Combat Sports Are Covered At Offshore Sportsbooks?

Boxing, UFC, and MMA are a few of the combat sports currently dominating the offshore online sportsbooks. If you go to any of the recommended sportsbooks on this page you will see that there are multiple sports categories to choose and under the boxing or MMA categories you will see the betting lines and pay lines for the fights or match-ups that Filipinos can bet on.  We have compiled a guide for Philippine legal online sports betting sites and Philippine legal mobile sportsbooks that individuals living in and visiting the islands frequently access for a wider range of betting lines on international combat sports and more. Our page offering Philippines sportsbook reviews provides recommendations for sports betting sites that are legally sanctioned, offer betting lines on combat sports and that welcomes Filipino bettors.

Which Combat Sports Can I Bet On At MegaSportsWorld?

MegaSportsWorld (MSW) has over 100 physical locations throughout the Philippines that offer combat sports betting for Boxing or MMA events, and the operator’s odds are now also available online in a limited capacity to VIP players. Betting on combat sports is done by wagering on a specific fight at an event. Most events have multiple fights so there are usually several fights listed you can choose from to place a bet.  MSW is a good destination for individuals interested in betting on local events, such as domestic combat sports, fights and events.

What Combat Sports Are Popular In The Philippines

Famous Martial Arts and Combat Fighters In The Philippines

When it comes to modern-day combat sports in the Philippines one name stands out among the rest, Manny Pacquiao. He is the only person in boxing history to win championship titles in eight different weight divisions and in 2015 he was named by Forbes as the 2nd highest paid athlete in the world for that year.  Pancho Villa was the first Filipino boxing world champion, he also won two national titles and fought over a hundred fights in his six years. His career ended when he died in 1925 of blood poisoning but he left a very impressive overall professional boxing record of 91-8-4.

Today Mixed Martial Arts is the most popular combat sport in the world and the Philippines have produced some notable MMA fighters in recent years including Mark Munoz, Brandon Vera, and Eric Kelly. No Filipino fighters have won a championship title in the sport yet but with as many good fighters as they produce, we are sure to see one prevail to the top of the list soon.

The Philippine Sports Commission promotes martial arts across the Philippines to the youth. They regularly hold events to teach and promote participation in Filipino sports. They also work closely with the Philippine Olympic committie to search and develop atheltes for Philippine national teams.

History of Martial Arts in the Philippines

The early history of Martial Arts in the Philippines is said to go back as far as 200 BC when the Malays came to the islands from the Southeast, they brought weapons described as long wavy knives that would eventually be transplanted into the Filipino fighting arts. It is believed that Kali was started by various tribes to defend themselves and is almost certainly strongly influenced by other martial arts from India and abroad.

In recent years, the Filipino government included martial arts into the national sports arena and into the physical education system for college and high school students in 1972. In 2015 & 2016 the UFC held MMA events in Manila showcasing Filipino fighters and furthering the popularity of martial arts in the Philippines.

Filipino martial arts are a combination of eastern and western martial arts. Arnis, Eskrima & Kali, for the most part, is the same martial art. Arnis is Spanish for “armor of the hands”, Eskrima is Spanish for “fencing” and Kali is a Filipino term used mainly by the southern islands to refer to this form of martial art. It is not unusual to find different instructors teaching techniques that vary from each other some but for the most part, they are all referring to the same fighting style. This style of fighting is known for its use of weaponry and defensive mechanisms. Considered by most to be the greatest weapon and hand techniques of combat fighting.