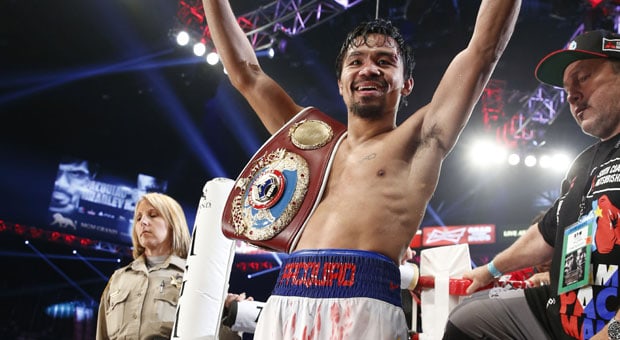 Manny Pacquiao is one of the most well know professional fighters and the first fighter in the history of the sport of boxing to win seven world titles in seven different divisions. He grew up in Kibawe, Philippines and was the second oldest of his three siblings. Eventually, his family would relocate to General Santo City to find work.

While in General Santo City, Manny’s father would leave the family and Manny would discover boxing. At the age of 13, Manny was forced to quit school and work in the streets. A friend of Manny’s, Abner Cordero and his father, took him under their wing and formally introduced Manny to the sport of boxing.

At the age of 14, Manny was given the opportunity to fight in an amateur league in Manila. Knowing that his mom and siblings wouldn’t approve, he left his family a note and ran away to pursue his dreams of becoming a professional fighter.

Once in Manila, Manny was forced to live in the training gym because of his financial situation. At first, Manny was unable to make living boxing and had to resort to scraping metal in a junkyard. Eventually, he would get an offer to appear on a national boxing show called “blow by blow”.

On January 22, 1995, Manny would make his professional boxing debut on the show at the age of 16. He was quick to grab attention because of his explosive style and determination. Manny was praised for his offense and quick attack that would eventually become his staple in the boxing industry.

Journey To The USA

In early 2001, Manny left the Philippines for the United States in pursuit of bigger fights. He landed in San Francisco but had a hard time finding a promoter willing to spend time and risk the investment in his skills. Eventually, Manny would discover the Wildcard Gym and trainer Freddy Roach.

Start Of A Legacy

Manny’s first fight in the USA was a pick-up fight where he filled in for a guy who dropped out. He had two weeks to prepare for his fight against Super Bantamweight title holder Lehlohonolo Ledwaba. The fight would end with Manny delivering a knockout blow in the 6th round. The fight brought a lot of attention to Manny in the United States and would lead to many more professional boxing bouts with trainer Freddy Roach.

Marco Barrera – On November 15th, 2003, Manny put on his gloves to fight Marco Barrera in what would later be known as the fight that jump-started Manny’s career. Manny won the fight with a TKO in the 11th round making him the first Filipino to become a three-division world champion.

Erik Morales – On March 19th, 2005, Manny fought Morales, a three-division champion, for the Super featherweight title. Manny would lose the fight to a decision but would bounce back and defeat Morales two times over the course of his career.

Oscar De La Hoya – In December of 2008, Manny would move up to the welterweight division for a bout against De La Hoya. Many people doubted Manny could keep up in a higher weight class, but Manny proved them all wrong when he dominated the fight and forced De La Hoya’s corner to throw in the towel after eight rounds.

Floyd Mayweather Jr. – On May 2nd, 2015, Manny would fight Floyd “Money” Mayweather Jr. in what would become one of the biggest grossing fights of the modern boxing era and billed as the “Fight of the Century”. In the end, Mayweather got the victory due to a decision, but many fans felt like Manny won the fight. After the fight, Manny told reporters that he thought he had won the fight. He said he fought bigger and caught him more times then he caught him. To this day, many fans dispute the judge’s decision of the fight.

After the fight, there were rumors swirling that Mayweather took performance-enhancing drugs among other things. There is also evidence that Mayweather took a shot after the weigh-in to rehydrate himself faster. Not long after Manny’s fight with Mayweather, he announced he would be taking a break from the sport. 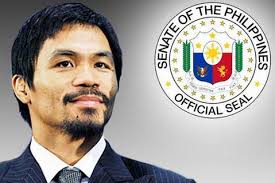 After being elected Senator in the Philippines Manny would make his return to the sport that brought him fame and fortune. On November 5th, 2015, Manny fought Jessie Vargas and won the WBO welterweight title for the third time by a unanimous decision.

Jeff Horn – On July 2nd, 2017, Manny would fight Jeff Horn in what was billed as the “Battle of Brisbane”. The fight would go down to a judges decision in which Jeff Horn was awarded the victory. Fans did not like the decision due to what they saw and to this day, many people still believe Pacquiao won the fight. Manny announced after the fight that he respects the judge’s decision and would be soon enacting the rematch clause.

Manny has recently called for a fight with many top names in boxing and in the mixed martial arts world. Manny has been asking for a rematch with Mayweather Jr. and recently started provoking a fight online with Conor McGregor.

Since the start of his career, Manny has always had the interest of others in his mind. From sending his mom money from the fights he won to protecting his little brother from bullies at school, Manny has always been there for his family and others in need. Over the course of his decorated boxing career, Manny has estimated that he has given away at least $200 million USD for charity reasons. Below you will find some of his humanitarian efforts and accolades that he has received over the years.