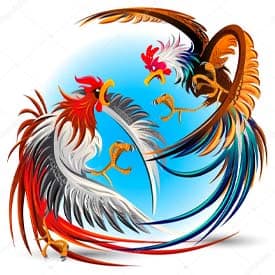 Sabong is also known as cockfighting and while many people see it as abuse to animals (chickens) it is a tradition in the Philippines that dates back over 3,000 years ago. The sport is essentially putting two cocks in a pin and betting on what cock will come out of the fight victorious. While there is no real skill in Sabong betting there are rewards for placing a winning bet.

Cockfighting is illegal in many parts of the world but since it is considered tradition it is allowed in the Philippines to this day. While the government has regulated the industry and optimized how they make money off the traditions, illegal cockfighting is still rampant across the islands. Illegal cockfights take place across the islands and especially in rural locations.

There are an estimated 2,500 cockpits spread out over the 7,100 islands that make up the Philippines. This page is dedicated to Sabong betting and will discuss the aspects around the sport and how you can get in on the action legally. And if you’re not convinced that Sabong is a very popular sport around the world, there are numerous forums dedicated to all things Sabong relevant, sites to stream Sabong matches, and popular events such as the Sabong Derby.

Is Sabong Betting Legal In The Philippines?

Yes, Sabong betting is legal and widespread across the Philippines. There are betting terminals and legal bookies at the cockpits that players can place their bets. Sabong has been quoted as being a billion-dollar industry in the Philippines and since it is so popular there are several ways for a bettor to bet on cockfighting while in the Philippines. The most popular way to get a legal bet in is to go to a cockpit and place a bet with a licensed bookie. Sabong betting online is not available from any reputable bookmakers.

Is It Legal To Bet On Cockfighting Online In The Philippines?

No, there are some online Sabong betting sites that operate locally, but the Philippines have made it clear that domestic online Sabong betting is illegal. Quezon City and Manila have both cracked down on operators offering online betting for cockfights. Local government code is specific in the fact that Sabong must be regulated and bets can only be taken within the jurisdiction in which the cockfight is held.

Even if an online betting site has secured business permits to operate, they must obtain an explicit approval or a grant of franchise by the city council to operate legally, which neither city has authorized. Since there is no formal online regulation, placing bets on the illegally operated sites is a high-risk and players could fall victim to scams or potentially have their winnings confiscated. Legally sanction Philippine friendly sportsbooks do not offer betting lines for cockfighting but do accept bets for other combat sports such as boxing, mixed martial arts (MMA), and more.

Who Regulates Betting On Sabong In The Philippines?

In the Philippines, Sabong is regulated by the Games and Amusement Board as commissioned by Executive Order 149 put into effect in 1993. The regulations set forth by EO 149 enforce strict rules and regulations to be considered legal under the Philippine gambling law. Bookies must obtain a government license to accept bets at cockpits and are subject to inspection from the GAB.

Once licensed a bookie can accept legal bets at the cockpits and offer many different types of bets on the event. Since there are so many illegal cockfights, the government has put the responsibility on local barangay officials to combat those illegal operations. In some cases, barangay officials have been arrested for not enforcing laws on illegal cockpits.

Horse racing bettors are familiar with offtrack betting (OTB) kiosks, where they can wager on races away from the actual racing venue. The same is available for Sabong, which is called e-Sabong in the Philippines. This lets bettors put money on cockfights without being at the actual cockpit, but it exists in a legal gray area.

While PAGCOR has been ruled to have oversight of Sabong and the legal authority to institute e-Sabong throughout the Philippines, the government gaming regulator has so far chosen not to, as remote Sabong betting is controversial. Indeed, in 2019, HB 8910 was passed through the Philippine Congress nearly unanimously. This bill would eliminate e-Sabong altogether, but it has not yet been signed into law.

There are over 2,000 cockpits in the Philippines, while most of them are licensed and in compliance with the local government regulators, there are also a bunch of illegal cockpits. Illegal cockfighting has been widespread since the Philippine government decided to legalize the sport to combat illegal activities.

Today there are enforcement agencies that combat the illegal fights by issuing citations, asserting fines, and punishing offenders with potential jail time. While Manila and Quezon City are the two areas with the most cockpits the sport extends all the way to each border of the Philippines. Rural areas are the hardest to combat but probably contain the most illegal cockpits.

How Much Is Wagered on Sabong in the Philippines

Because there is so much illegal Sabong betting action, it is impossible to know precisely how much is wagered on the sport in the Philippines. We do however know that the Philippines Sabong industry is worth Billions of dollars annually.  Yes, we said Billions.  Not only is it the most popular sport in the Island nation, it is also a significant part of the Philippines ‘ culture and has been for the last six thousand years.  Everyone from the very poor to the very wealthy engages in the sport, with billions of dollars wagered on the hundreds of millions of cocks that are slaughtered in the bloodsport each year.

History Of Cockfighting In The Philippines

There are many accounts of cockfighting in the Philippines that date back over 300 years ago and some historians say that cockfighting has existed for over 6,000 years. Whatever the case, it is documented that when Ferdinand Magellan landed on the islands of what is now known as the Philippines in 1512, indigenous people were betting on cockfights. The practice has been around through several different government changes and leadership changes until the Philippines gained their independence in 1898.

Since then the government has enacted laws and regulations of the sport to earn revenue for other community services. While the sport is a blood sport and cruel to the animals that are forced to participate, a lot of good comes from the taxes and licensing fees stemming from the sport. Sabong has withstood the test of time and in the Philippines, it is a tradition that will not be going away anytime soon.

Not for the faint of heart, the Sabong Derby is an event best reserved for the cockfighting aficionado.  While all Sabong is brutal and quite bloody in nature, the Sabong Derby brings it all to a whole new level both as a spectacle and financially.  Once known as the pintakasi, the Derby can last anywhere from 1 day (into the midnight hours) for 3 cocks or several days for a 7-9 cock event.  Each team must pay a designated buy-in.  The buy-ins are combined to make up the pot that will go to the winner of the Derby.  It is not uncommon to see a P10,000 requirement for entry.