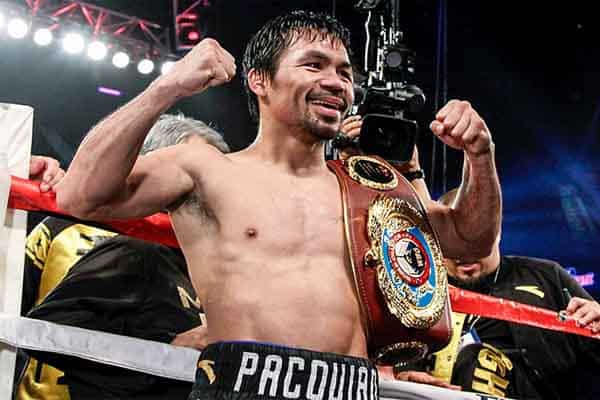 Manny Pacquiao has exploded back onto the boxing scene with a win over Lucas Matthysse. The 39-year-old Filipino boxer won in 7 rounds and claimed a secondary welterweight title in the process. The fight took place in Kuala Lumpur, Malaysia.

Leading up to this fight, Pacquiao hadn’t fought in a year. His previous fight was against Jeff Horn and turned out to be a bloody battle that cost Pacquiao one of his welterweight belts. Matthysse is a veteran fighter as well at 35-years-old. Manny was the sportsbooks’ favorite in the projections for this highly anticipated bout. Anyone who likes betting on boxing knows Pacquiao is usually the favorite. It appeared their predictions were spot on as Pacquiao dropped Matthysse 3 separate times in the fight. The first drop came in the third round, the second in the fifth and the final drop in seventh.

The 2 fighters were even in size, though Pacquiao had more experience by far and looked to be the stronger competitor. In Matthysse’s last fight, the Argentinian looked more than shaky in his knockout win over Tewa Kiram. You can make the argument that this win wasn’t that impressive for Manny given where Matthysse was at in terms of conditioning and skill, but fans of the storied boxer were elated to see him back in the ring. This was his first KO victory since a 2009 fight over Miguel Cotto.

This type of narrative is good for the sport of boxing. A highly successful veteran fighter steps back into the ring and wins via KO stoppage. Rumors have already begun swirling around who will be the next fighter to face Pacquiao. Oscar de la Hoy is a name that comes to mind. Other potential suitors are Vasiliy Lomachenko, Amir Khan, and Adrien Broner.

Perhaps the most compelling narrative to emerge out of this fight comes with Pacquiao’s comments after the fight. He said he would be more than willing to set up a rematch between Floyd Mayweather Jr., should he decide to return to boxing. The 2 boxing legends squared off not too far back in one of the highest grossing Pay-Per-View bouts in history. Sportsbooks also made a killing with taking wagers on either fighter. Manny will likely have to face a couple more boxers before enticing Mayweather back into the ring. If it does happen, expect Mayweather to only come on board for a monumental payday, much like their last fixture.

Filipino bettors love to rally around their hometown hero. This fight against Matthysse reinvigorated their love for the sport and if Pacquiao continues to fight you can expect a high volume of bets flooding in from the Philippines. It is true the Filipino boxer has aged and is towards the end of his career, but this last run could set up him for a storybook ending. Pacquiao has expressed interest in more fights, so it’s time to sit back and enjoy the show.