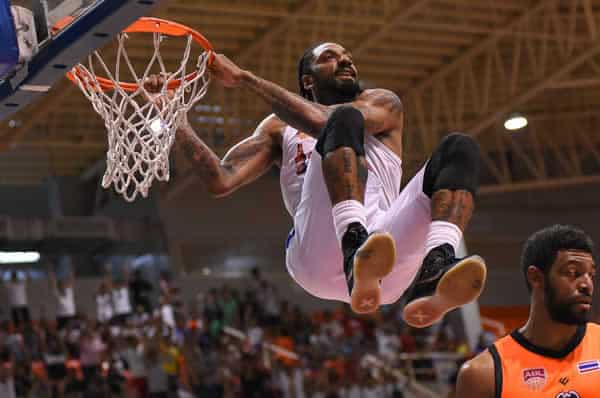 Renaldo Balkman is an American born ABL basketball player currently playing for the San Miguel Alab Pilipinas. He was born in Stanton Island, NY and played and was recruited to play basketball at the University of South Carolina. In college, he won some awards for his playing skills and was eventually invited to the 06-07 NBA Draft. He was chosen by the New York Knicks in the first round in a move that surprised many analysists. After a couple of seasons in New Knicks, he was eventually traded to the Denver Nuggets it what was later determined to be a salary-dump deal.

In 2011, He was traded back to the New York Knicks and in a deal that involved Carmello Anthony and Chauncy Billups among others. He didn’t get to play much in the 2011 season and eventually was released during the 2011-12 season. A year later he would sign with the Petron Blaze Boosters of the Philippine Basketball Association (PBA).

Banned From The PBA

In the 2013 PBA season, Balkman was banned from the PBA for life after he had a breakdown on the court that lead to him pushing referees and fighting a teammate that tried to break up his altercation. Balkman claimed he was fouled and when the referee didn’t award him the penalty he went ballistic and shoved the referee and another referee before he eventually put teammate Arwind Santos in a chokehold. He was ejected from the game and soon after banished from the PBA for life.

Making His Way Back To The Court

In 2014, Balkman would meet up with point guard Jimmy Alapag at the 2014 FIBA World Cup. Balkman nonchalantly told Alapag that if he ever got into coaching to give him a call. In 2017, Alapag got the call that he would be the head coach for the Pilipinas Basketball team. The team was lacking a real defensive player and when they started the season 1-4, Alapag knew some changes had to be made if they wished to compete.

Soon Alapag was able to recruit Justin Brownlee, a fan favorite but they still needed at least one more player to bring them into contention. After a long night of procrastinating, one of his assistant coaches mentioned Renaldo Balkman. Alapags eyes lit up and he said that was the best idea of the night. Balkman got the call and said it was like a dream come true for him. Once Balkman and Brownlee joined the team they won 13 of their final 15 games and made the playoffs.

The Pilipinas went into the playoffs hot and it seemed as if they were moving into high gear when the defeated the Saigon Heat and then the defending champions Hong Kong Eastern Long Lions. His tallest challenge was still yet to come. In the final series, he had to guard 7 foot 5 Sam Duguara of the Mono Vampire Basketball Club. The series went for 5 games and Renaldo was named the ABL co-defensive player of the year. Balkman was also able to get his lifetime ban from the PBA lifted after a consultation with the former league commissioner.

Whats Next For Balkman

Now that he is an ABL champion many fans are wondering what he will do next. He did manage to get the lifetime band lifted but has not said whether he plans on returning to the PBA or not. He was out of play for 5 years before his comeback but this year he won the hearts of many Filipino basketball fans when he helped lead them to the championship. He claims that his 2013 outburst was just a breakdown and he has never acted like that before in his life. It is obvious that he loves the game and Filipino fans are now welcoming him back to the court with open arms. Only time will tell what his next move will be but for now, he can call himself a champion for the Philippines.

Filipino fans of the Asean Basketball League can use offshore sportsbooks to wager on their homegrown basketball team the Pilipinas. While there are multiple ways to get your bets in, we have found that online sportsbooks offer the best perks. Online bonuses are common with sports betting and many of the best sites also have referral awards and other promotions.